“(…) My phobia about space is due to my rebellious character! Unable to face the outside – that is to say to rebel-, I turned towards the exploration of the inner space; which is a political act; so as my books concern the inner space, they are surreptitiously subversive: they stealthily teach the art of rebelling (mainly through escape – breaking away). “ Philippe K.Dick (1)

If the Atlas Mountains of David Renaud unfold through various mediums, from sculpture to book, the exhibition titled “Nowhere” presents a set exclusively made of paintings. Dating back from 1990 to 2020, they invite to travel over the artistic work through the prism of the pictorial practice, though such a critical exploration is from the start, as such, fated to fail… After all, Nowhere is also a point on the map, and the story begins somewhere, precisely with a camouflage motif which the artist refers to as his first painting.

This is the outset of the question of the landscape as a subject for painting and the means to treat it at the turn of the twenty first century, but also the legacy of modernity, which knows the invention of the landscape and the project of mastering the whole of land areas simultaneously. In a text titled “a matter of scale”, the artist showed the causal link between camouflage and a map in the visible world, whereas one appears as the result of the other in his painting “It is the sight from above, which, by claiming the veracity of the map representation creates the necessity to conceal people and their materials (…), protecting them in this way from mass destruction means”. From this obvious fact, – as for the spatial distribution of defensive and offensive tactics – David Renaud has undertaken to trouble the landscape, through visual and linguistic speculations, in the depths of this monstrous logic. This logic rests on perfecting two dependent systems of representation, desiring a complete vision as much as the capacity of disappearing completely, combining the sophistication of the code and the original imitation, the projection from extremely far and extreme immersion into the landscape, for one purpose: destroy it.

So we could already follow the constant zoom and un-zoom effects in David Renaud’s work, on real and unreal territories, on more or less abstract surfaces, like a movement modified by the inexorable and programmed character or the disappearance of the world. Let’s be clear, these considerations underlie a practice apart from any declarative or transcendental function of painting, but is deliberately part of the legacy of concrete abstraction, giving form, through objective facts, to rather mute matter (and this silence contributes as much to their elegance as to dismissing any suspicions, as with the visible part of the new imperialist strategies).

The maps in this work have been drawn only for their political and financial issues. This is the case for the exclusive and economical zones which characterize the composition of the picture Pacifique I (ZEE), whereas its matching piece (Pacique II) frames exactly the same perimeter of the ocean and transposes the complex organization of time zones into a plausible geometric abstraction. Here, the reference to a formalist tradition inherited from the fifties participates in a game of pretense in order to emphasize today’s realities, even more, the current regulations, which govern the uses of a given space, in real time. In other works, the re-use of a plastic vocabulary belonging to minimal and conceptual art or to new-age culture seems to take part in this very rhetoric. This feigned and outdated position results in the betrayal of the contemporaneousness of territorial wars taking place on the other side of a world where the economical system has eradicated any spatial representation with the soothing image of its dematerialization, in which the remote location technologies are one of the main threats against democracy. Thus the dialogue, which the non- lyrical abstraction has always had with the tangible reality, goes on, and which was to become more complex with the increase (of the perception) of reality. For that matter, it would be fit to reverse the terms which that characterize this so-called abstraction imposed by objective realities, by considering the power of abstraction which commands the institution of the facts represented on a map.
The objectivity of David Renaud’s paintings, restricting, in their making, any decision or accident, contrasts with the arbitrary character of certain boundaries. And we could add that their frontal, consistent (on wood panel) presence sends back most geographic facts to their impermanence (due to rising waters, receding glaciers, resource depletion, etc.).

This practice, which gives birth to an aesthetic experience and appears for what it is not, would then, of course, have its source in the motif of camouflage. However the camouflage is never evoked as a lure emblem, on the contrary, it always has a precise referent with David Renaud: the equipment of the American army in Vietnam (at night) for the first case, or, in 2005, that of the Russian army standing guard in the separatist Chechen areas (Russian landscape). In a text about it, the artist insists on the fact that the camouflage is not an image, but a sign. He mentions that dissimulation tactics have been replaced by an ostentatious function of the camouflage, like the colorful pomp of a territory – a complete appropriation- to serve and show the power of the occupying forces. The recurrent motif in his painting would be due to more or less visible conflicts going on in today’s world. But it is also an ambiguous factor in a work where you have seen the correlation between the question of what you see and domination, and then, of freedom and invisibility.In a major text about David Renaud’s work, Jean-Yves Jouannais (2) argues about the camouflage motif starting from a double-meaning sentence written by Franz Marc about this pictorial technic, which he used, as did other avant-garde painters, during the First World War. Marc mentions the advantages of the jamming of army positions, as much as the artistic positioning. Thus the historian detects, in the impression of trouble or opacity in David Renaud’s paintings, a manner of keeping away their intentions, of jamming their aura. We know Andy Warhol has devoted his work to that, and his paintings of camouflages appear in 1986 (without David Renaud knowing about them), in an ambiguous mood, between a renewed interest in abstraction and the last wish to undermine its worth of expression and originality.
But this is also the promise of an immersive experience of painting, and the liberating power of such an experiment of art as a whole, that Warhol despises (3). His screen-paintings seem to invite the onlooker in the same contradictory way as David Renaud’s, the temptation to be taken up while held back at the surface. In this way the extreme flatness of the painting makes you feel giddy. It is so with the series Les Enfers, being nearly ironical about the power of monochrome (named “empty painting” by Warhol): reduced to a colored background, letting appear, in reserve, the GPS coordinates of what cannot be represented and named in the title – the coordinates of a forsaken, probably ordinary place.
And a romantic feeling remains in the experience of this painting, with no perspective or depth, with no subjectivity.An impersonal romanticism.
To understand its motives would demand to analyze the use of the words which combine what is sublime and what is ordinary, but above all, to observe the link of the text with the image. Because the differences or the coincidences, just as spectacular, always seem to send back to the conditions necessary to imagine the situation of those looking at the painting (landscape), or to imagine the space between them. It is obvious in the eponymous painting Nowhere, in which the GPS coordinates indicate a precise place, thousands of kilometers away, whereas the title can be read by the followers of Lewis Carroll, such as David Renaud, as the contraction of an antonym phrase: “now, here”.

It is there, through literary influences that a personal sensibility passes discreetly in this work without a subject, and opens a vanishing path (not a line) behind the screen of the painting. Turning your back on, you will come across one of the many references to Carroll in the titles of David Renaud, titles that are often the subtext of the painting. The Hunting of the Snark, a recurrent motif (Bojeum, 1997) had first been mentioned in an environmental version of this extra-terrestrial camouflage, The question was, then, to secretly leave painting, in the same way as Carroll’s characters come and go from one world to another and confirm an existing passage, rather than differentiate the world of dreams from the real world.

David Renaud’s work would also acknowledge the possibility of everything being reversible, the probability of everything being one thing and its opposite – as the red jewel turns out to be also the blue jewel in Sylvie et Bruno – which would allow one to relativize any comment about it. The many echoes with the reappearance of a motif or of another version of a previous work contribute to the jamming of the reading of his work by making any linear approach unfit. But the reference to Philippe K.Dick and its Hollywood adaptation pointed out in the painting on wood Recall (2015), after Total Recall (1997), is far more meaningful. It is not only a fiction in which dream meets what really has happened, but in which the memory kept of a journey, like in Rekall, is doubted. Before using weapons the character falls into deep melancholia, and Arnold Schwarzenegger exclaims: “If I am not me, who am I”? 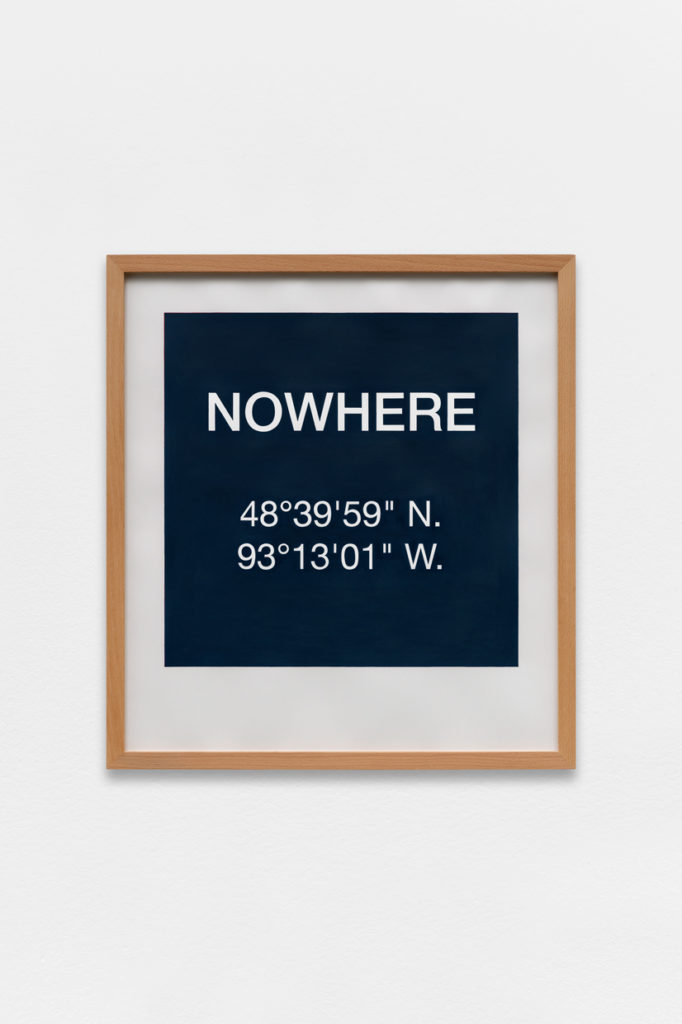 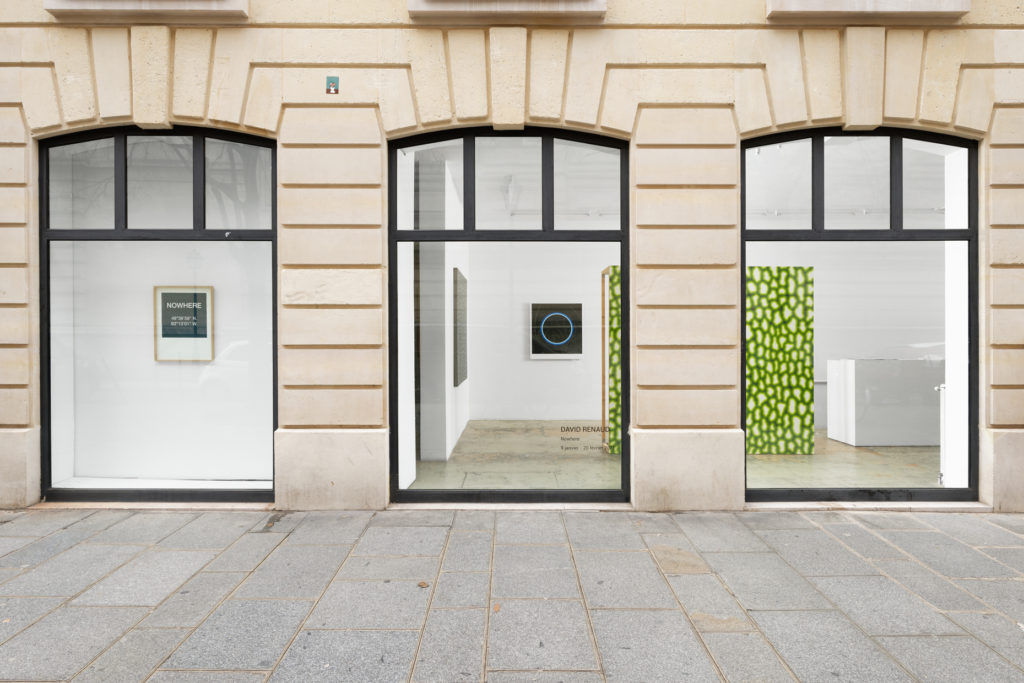 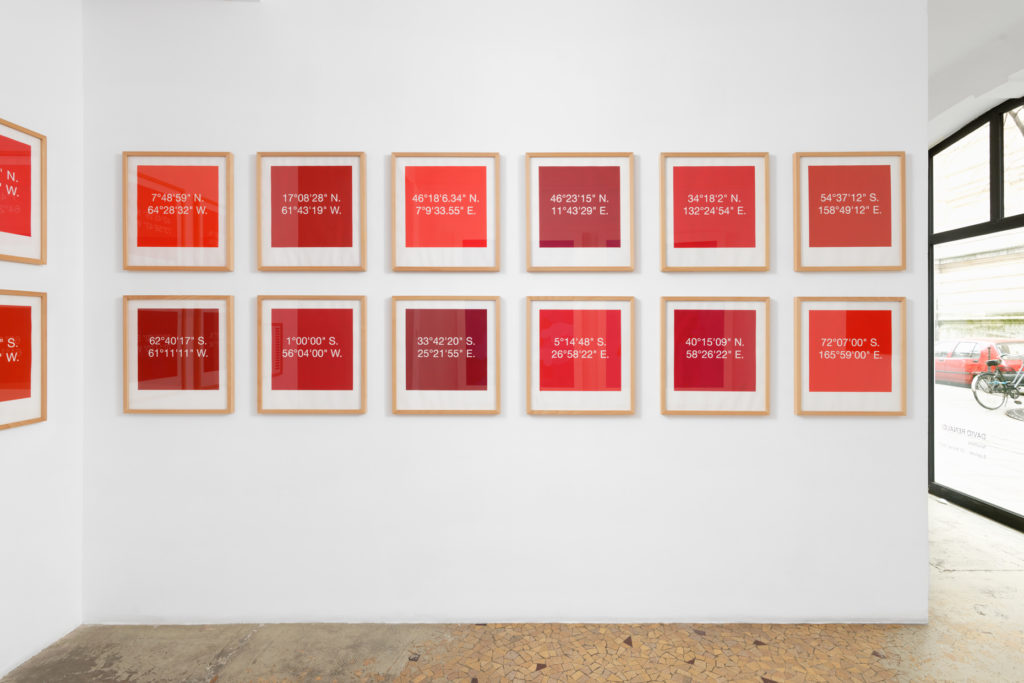