Gallery Anne Barrault is happy to present Liv Schulman’s first solo show. In summer 2021, Liv Schulman made a film with amateur actresses and actors in Omaha in Nebraska. The New Inflation is both a film work and an installation with ceramics, puppets, chairs and wood.

“Inflation is for me an economic and affective account, specific to a country. This economic phenomenon governs the Argentinean way of life. It is intrinsically linked with the relationship of the country with the debt and the United States. I can say that inflation is our national madness, it is quite fierce. It creates a complex way of thinking, with its own consequences in time, and its own narrative of our history and of our future” .
Liv Schulman

I send you this mail to let you know I am not sure I am able to write the press release about your exhibition The New Inflation at gallery Anne Barrault. I do understand that the deadline for the text was 10 days ago.

I am really sorry to let you down. We have just discussed the phenomenon, the extreme volatility of promises. My attention is distracted, projects pile up, as well as hindrances. We have talked about the way the difficulties we may meet shape our projects, how the invitation, production and exhibition contexts are as important as the art piece itself, how we must learn and relearn to make works differently in a faulty and hostile environment. You like it when I speak of our faulty and hostile milieu, and I like it when you say: “That’s it!”

However I have noted a few things, and thought about possibilities for your text. Here they are, if you wish to pass them on to someone who would take over the mission (if it is not already too late). It is the least, but also the best I can do. The talk we had together was intense. I did love the way you talked about the film, the exhibition, the genesis of the project, its transformation, the 2001 economic crisis in Argentina, imperialism, colonialism, peso and dollar, inflation, red lining, the Duke of Orleans and his 1721 titles for the future, dying Omaha art center, Warren Buffet who finances the area with cows and soya, endless cancelled flights, the ignored queer love story, the fact you thought of having a residence in Chicago and not in Omaha and making a performance and not a film, social injustice, the black holes among us when we discuss organ transplants, the expanding universe at the root of the Big Bang, and the privatization of every thing. It was an expanding conversation, an inflation of information, ideas, and details, everything was perfectly connected, it was clear, I should have recorded it!

Here are random notes:
The FOMO and FIMO puppets must definitely be mentioned, never mind the spoilers! Fear Of Missing Out and Fear In Moving On (by the way, are you sure it is correct in English?). They haunt me, I think they are the key of the film, or the escape route?
Don’t forget to describe the space of the gallery, the floor covered with large wooden boards with holes, the gallery windows obstructed with plywood, which reminds one of the time of the shops protecting themselves from the yellow vests demonstrations. The fact that the film can be seen from the street through the holes in the plywood. I wonder if a film is not better seen, when you have to get over an obstacle to see it; you concentrate on it. Is it the idea of the holes? Attention in dispersion. The clothes have also holes. You talked of pieces lacking understanding in the work, which create new narratives, didn’t you?

I think it is worth mentioning the story of the Twin Peaks credit titles, how Angelo Badalamenti composed the credits music by adding notes or a group of notes as Lynch described the scenes to him, and how Sylvie Fortin, the curator of the Bemis Art Center, did the same by gradually adding elements to the proposition; a performance; in three acts; on economy, with local actresses and actors, and how you accepted each addition and completed the score.

It is I in this list. It is a composite model of myself, the score of my difficulties, my inability, my desires, and eventually the fact I have left you stranded. Apparently, you had foreseen it! These characters cohabit in the film, as they cohabit in us, because you compose a complex and diverse experience rather than a one-dimensional and normative one.

I am really sorry, you know.


*Phoenix Atala is  a queer Franco-Maroccan artist. After being the third member of “le Grand Magasin” in the 2000s,  he continues, semi solo, with his activities of experimental deconstruction by making films, video games and performances. Since 2019 he teaches at “ebabx and is in residence at “Les Laboratoires d’Aubervilliers” for the project “Défaillance Critique”. 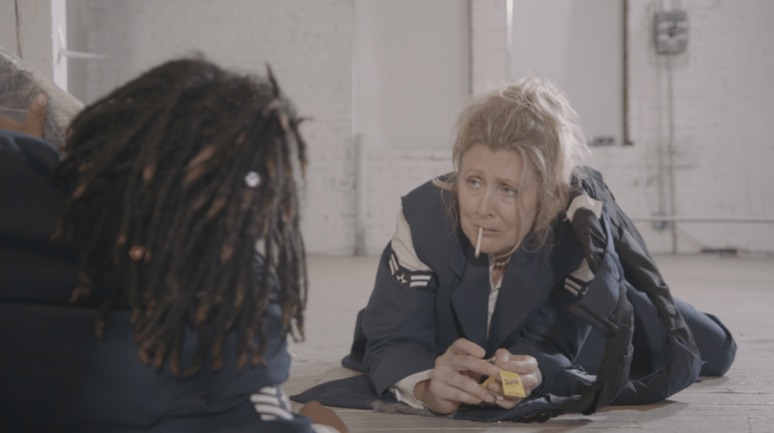 The film The New Inflation was born out of Liv Schulman’s research into the multiple meanings of the term “inflation”. Most often, this word is understood as an economic term, meaning the increase in the general price level on world markets.

But the term ‘inflation’ is also used to describe the expansion of the universe at its creation. This event lasted 10 seconds after the big bang. Today, the universe is still expanding, but at a slower rate.
“Inflation, for me, is a particular economic and emotional narrative. This economic phenomenon governs the way of life of Argentine citizens. It is intrinsically linked to the country’s relationship with the United States.

As an Argentinean, I can say that inflation is our national madness, and it is very fierce. It creates a complex system of thought with its own consequences over time and its own narratives of our history and future.”

The New Inflation is a feature film that takes place in a performative space.
It uses several layers of narrative systems. With a group of actors and the use of sculptures, the film takes the form of a funny and depressing collective stand-up.
“I try to draw a portrait of a disenchanted economy, based on the principle of error and dependence.” This series of playlets is rooted in different heterotopias, such as the customs offices at the border of a country, the cosmos of knowledge that informal economies can produce, the different conquests of the Americas and the urgency of anti-logic as currency.
By using the idea of crisis as a resource, we move away from the well-known phenomenon of devaluation to explore a mythology: inflation.

Inflation creates new forms of relationships, new interior decorations, new wallpapers, new border controls, new forms of political expression, new relationships to language and new fantasies that accompany the new markets.
And inflation can also be seen as a link between the individual and the universe.

In a frenetic form of storytelling, the narrative relies on global errors as a form of positivity, forming a system of thought based on the idea of error as opportunity, and allowing signifiers to slide into each other through similarity. Here, a mass of stories converge into a possible reading of a form of economy that is as global as it is personal.

In The New Inflation, the actors and actresses are amateurs. In real life, they are teachers, nurses, or insurers. These actresses and actors play all the characters in the film, embodying identities in this latter, a circulatory and inflationary asset that becomes interchangeable. These characters (Rockbottom, Flaw, Myneeds, Wrong and Best Intentions) are indicated by the use of a prop that adapts to the comedian who, by wearing it, becomes a rotating energy of a certain type of information. The New Inflation was filmed in Omaha, Nebraska, the home of Malcolm X, Warren Buffet and Marlon Brando.
The Bemis Art Centre for Contemporary Arts hosted this project under the direction of curator and art critic Sylvie Fortin.
The project, initially conceived as a live performance in three episodes, took place during a whole year of pandemic, which led to its transformation into a feature film. 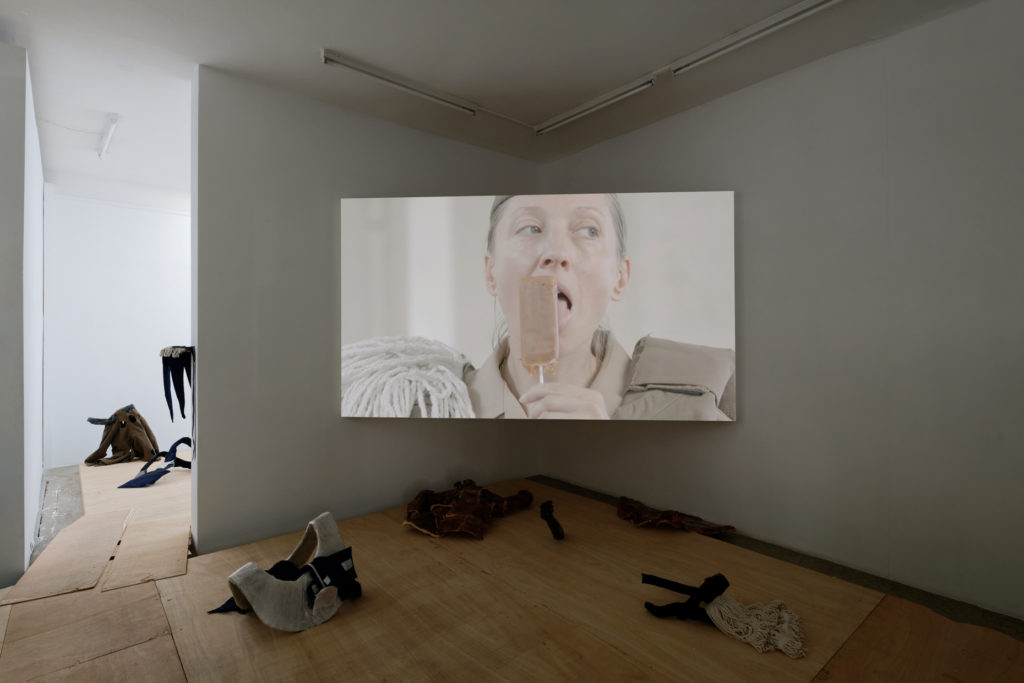 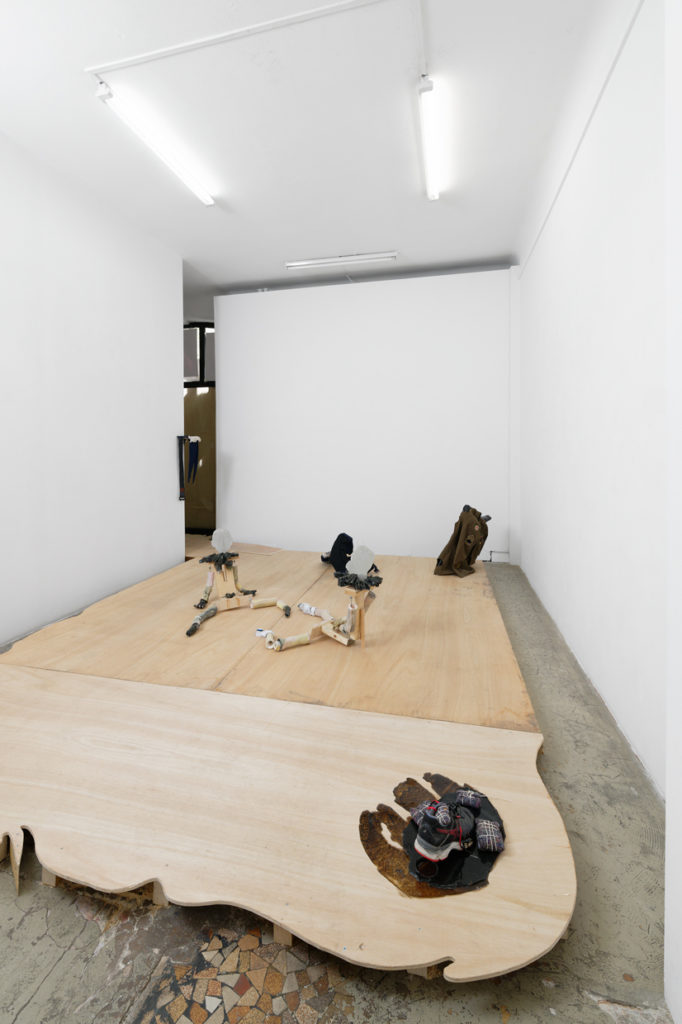 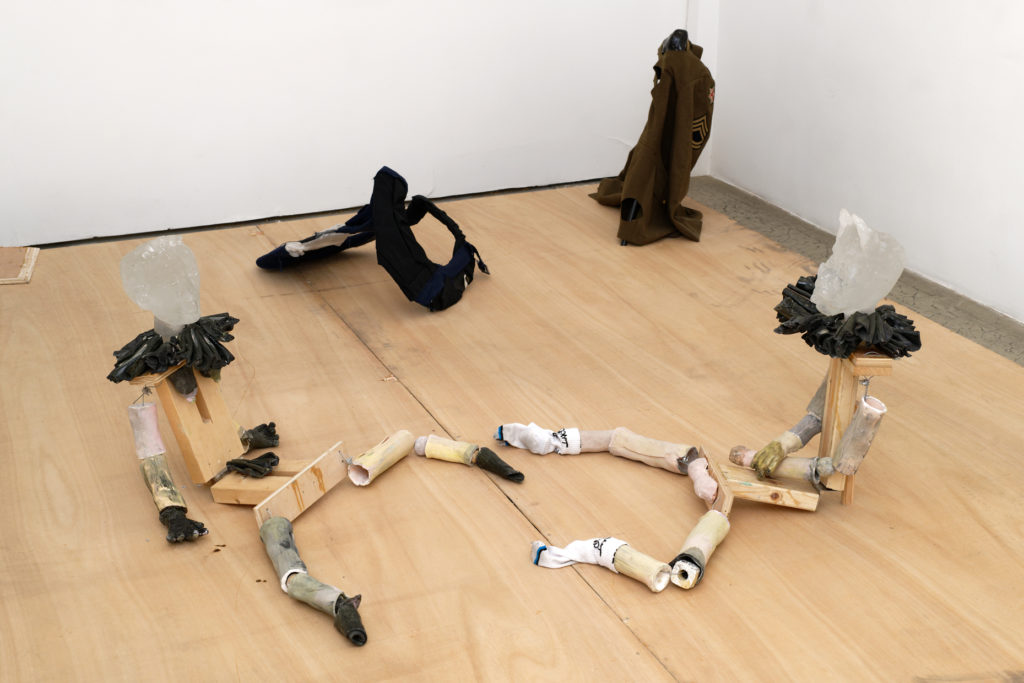 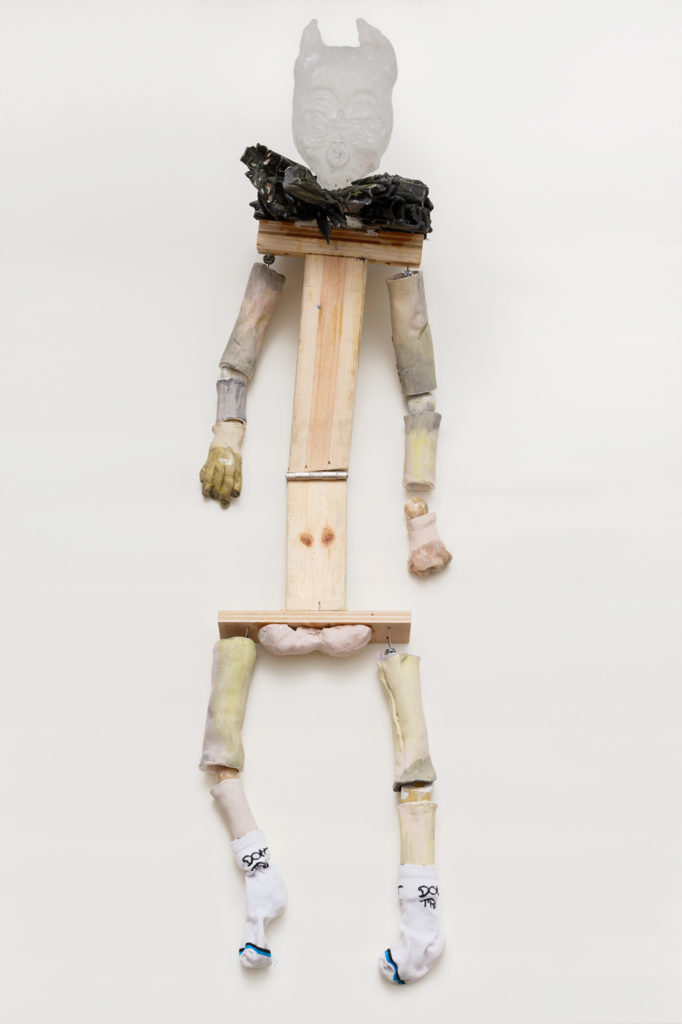 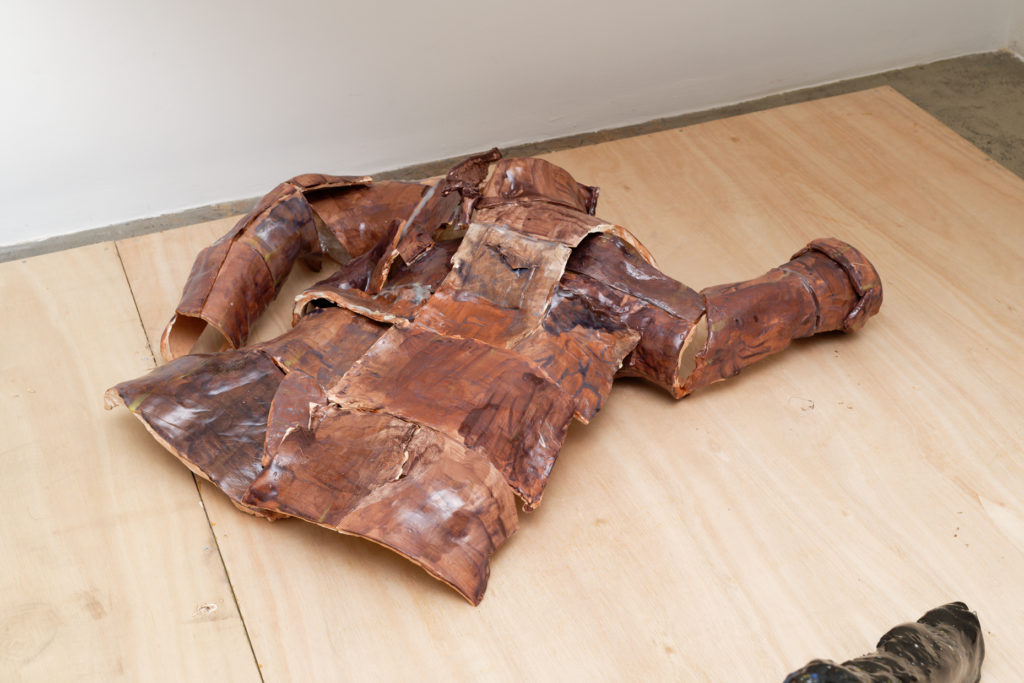 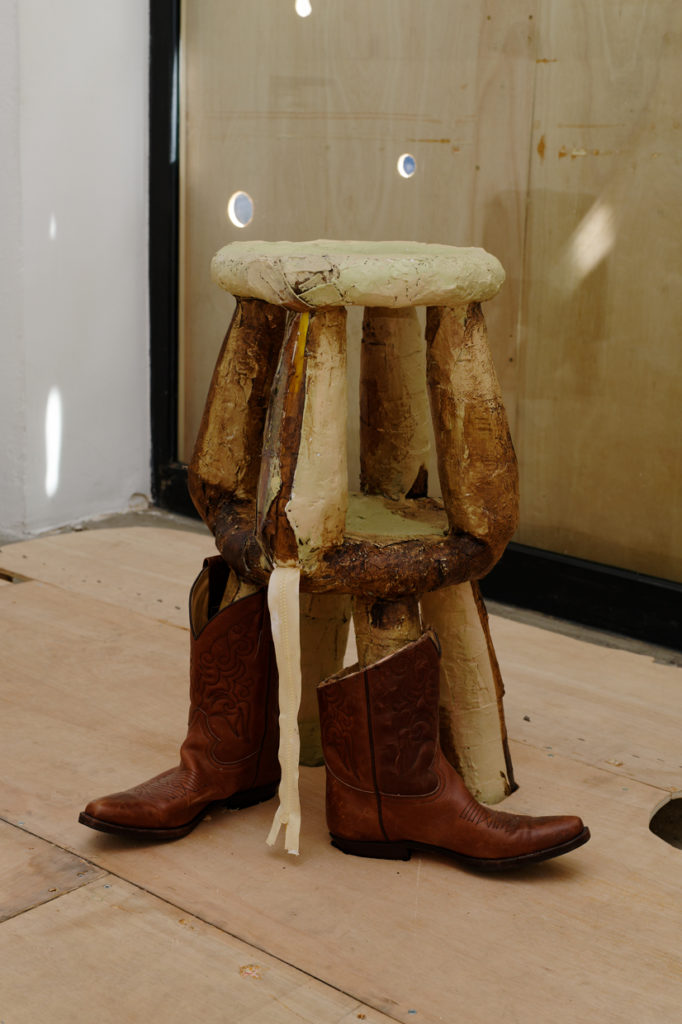 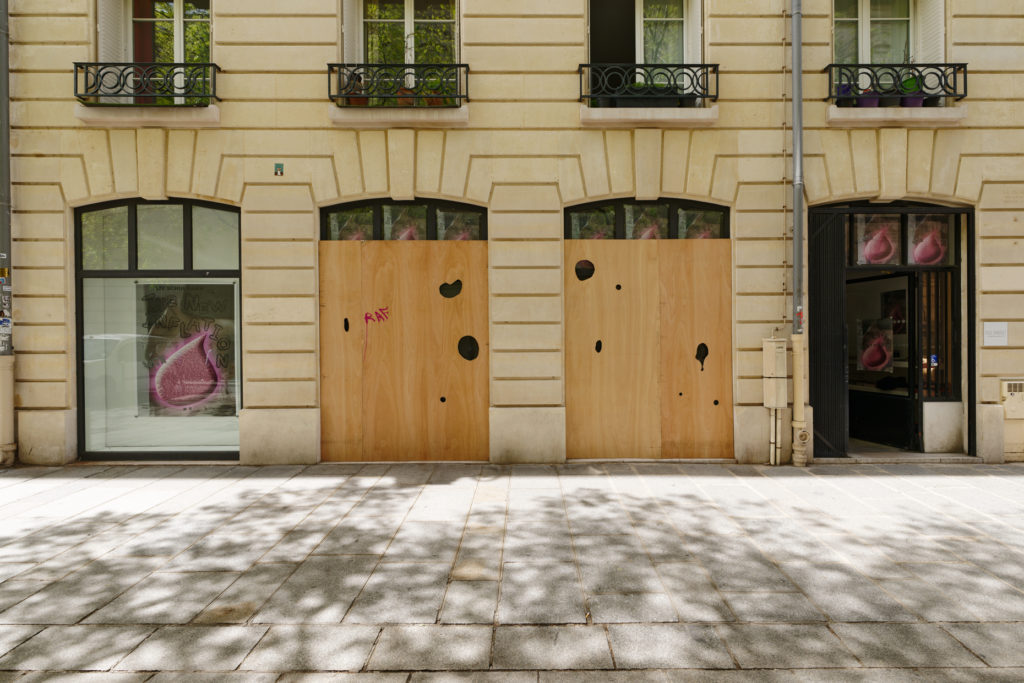