Gallery Anne Barrault is pleased to present the new exhibition of Daniel Spoerri on the occasion of his ninetieth birthday. The visitor will discover 9 works, like 9 candles. These works, achieved at various times, punctuate the career of this great artist until today, while he goes on creating.

Daniel Spoerri was born on 27 March 1930 in Galati, Romania. He emigrated to Switzerland with his mother, brothers, and sisters after his father was killed in a pogrom in 1941. In Zurich, he debbled in various odd jobs until dance put an end to his drifting. And yet, from jazz cellars to the Bern opera house, his world still seemed too narrow. He left for Paris, with Jean Tinguely and Eva Aeppli. It was the las hurrah of the avantgarde : their ramshackle studios in the impasse Ronsin hosted the meetings, discussions, and enthusiasms of these young artists, exalted by the desire for a new life and a new art.

This was the era of the fist snares that Spoerri laid for « the real ». After the avant-garde, dance, gestures and poetry, the world of objects opened its door to him. The artist tells of a visit to ironmonger with Tinguely, who helped him mark out a square meter on the ground, where unvalued trash and debris seemed to assume a form, almost to tell stories. Spoerri explored this connection between objet and narrative in the Topographie anecdotée du hasard, written in 1961. The 1960s were also the first period of the « snare picture », in which objets became witnesses to anonymous lives. Around these tables set at a 90° angle, gestures, discussions, and encounters still resound. For him, everything was a a question of territory: « My art, if you want to call it art, was to have discovered how to use these objects to make my own territory (…). Once, I saw everything stuck to the wall. And an incredible joy filled me (…). These objects were no longer sordid, the hotel room of someone who no longer knows who he is and lives in a wretched room… I was rich1. Once pinned or mounted on walls, objets became clues, they gestured towards the past, the elsewhere, the other. For Daniel Spoerri’s territories were above all human. The uprooted child, jostled from country to country, found his homeland with Jean Tinguely, Dieter Roth, Bernard Luginbühl, Robert Filliou, Raymond Hains, Meret Oppenheim, Roland Topor … All the important events in Spoerri’s life took place in the process of exchange.

On 27 November 1960 in Paris, he signed the Declaration constitutive du Nouveau réalisme. Even when he decided to burn his bridges, as in 1966, when he settled on the Greek island of Semi, he corresponded with his friends, asking them to send him recipes, and created from these, as well as his discoveries and local encounters, as review entitle Le Petit Colosse de Symi.

It was in Greece, far from the abundance of France’s Trente Glorieuses and the joy of consumption, that he discovered the mythopoetic profoundly of things, the way they accompagne lives, mediate gestures, relations and customs, and finally, embody an entire social and symbolic system.

From then on, his aim was no longer simply to capture situations but to recount them, even to create them. Several of his works are almost anthropological studies, like the Guide des fontaines sacrées de Bretagne, the product of a collaboration with historian Marie-Louise von Plessen, or more recently, the Pritzwiller idoles. The banquet he organised starting in the 1970s became a theatre of experiences as much concerned with food as with relations formed around shared meals.

So many different approaches to the human fact as it finds itself embodies in the universe of things. By inviting artist to exhibit at the Eat Art Galerie, which he founded in 1970, or in the Giardino of sculptures that he began building in 1990 in Italy, Spoerri embodied, in another way, the networks and friendships that shaped his life and career. When the Bern Kunsthalle offered him a retrospective in 1969, he accepted only on the condition that he could invite his friends to exhibit with him2.The artist included himself in the sentimental geographies that he composed in his works – and, progressively, in the eyes of those who study his works – that territory whose proclaimed materiality goes beyond objets, places, and dates. When he recounts himself – and, above all, in his biography by Otto Hahn, written after a long series of interviews and discussions – his story is formed stitch by stitch, held together by the importance of its interstices.

Works, exhibitions or banquets focus the gaze, but we must also navigate in between, in the silences that give words their weights, in the emotion that colours meetings, and in the friendship that gives substance to artistic dialogues. Spoerri was aware of this, he who offered a course at the Munich Kunstakademie in « art hi/stories », intimate, sentimental, and anecdotical (aus dem Nähkästchen geplaudert). 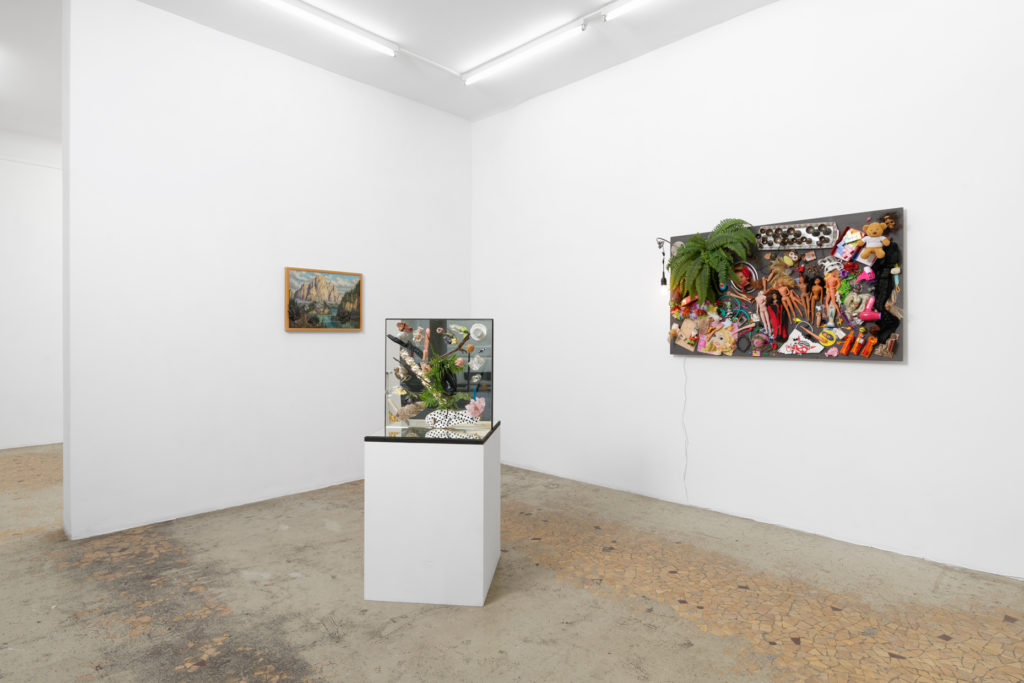 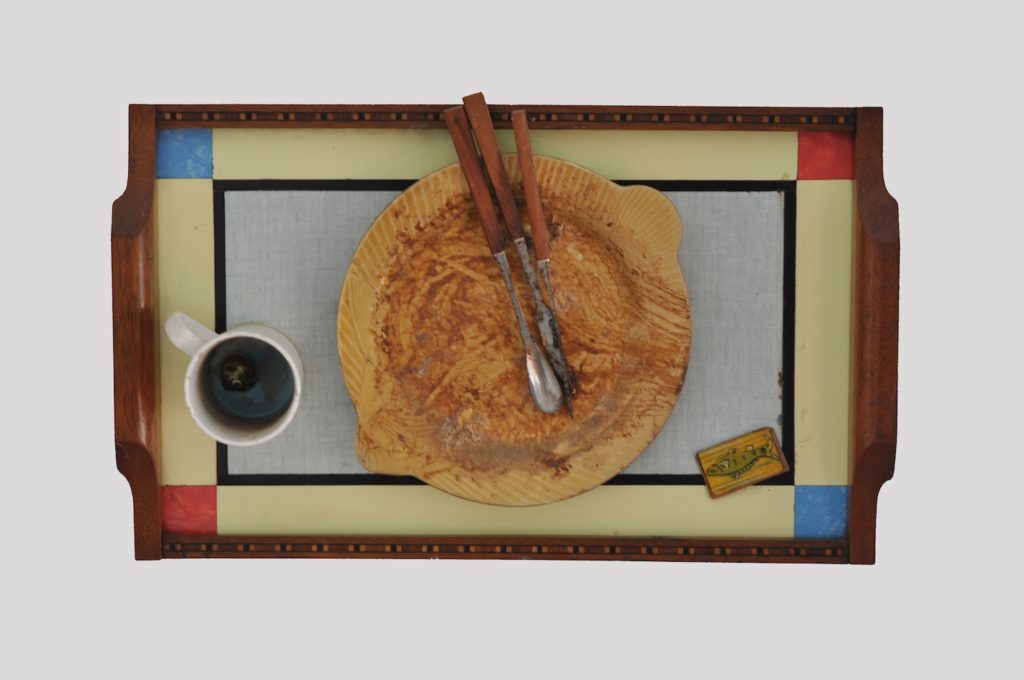 On Thursday April 2nd, the Swiss Cultural Center  will show Anja Salomonowitz’s film “This Movie is a Gift”. A swap of “picnic food” – Daniel Spoerri concept dinner – wil take place from 6pm to 8pm,  before the projection of the film.  Each person  brings his own picnic, which will be randomly given to someone else.
Centre Culturel Suisse, 38 rue des Francs-Bourgeois, Paris 3e

With my gratitude to Daniel Spoerri and Barbara Räderscheidt, without whom the exhibition would not have been possible.
I would also like to thank Deborah Laks, Danielle Morellet, Annabelle Ténèze & Valentin Rodriguez from Musée des Abattoirs, Claire Hoffmann from Centre Culturel Suisse, Rébecca François from MAMAC, Nice, and Alexandre Devaux.