The Anne Barrault Gallery is pleased to present the first solo exhibition of Rayane Mcirdi.
This young artist, born in 1993 in Asnières, produces a video work in which the actors are members of his family or close friends. His films capture intimate or collective events rooted in daily life. The artist becomes an ethnographer, collecting these micro-stories.

Here he will present three of his films: Le Croissant de feu / The Crescent of Fire (2021), Love will come later (2019), made during his studies at the Ecole des Beaux-Arts in Paris, which has never yet been presented in France, as well as a new film that he will shoot this summer.

Babylonia, Carthage, Chichen Itza, Constantinople, Pompeii, Teotihuacan, Volubilis, Xanadu, the examples of lost cities are found all along the pages of history as well as in mythology; they are beyond time and continents. What is left of their fame, under stones and ruins, behind clouds of smoke and oblivion, if not names and memories?

The lost city of Samir, the recurring protagonist of Rayane Mcirdi’s films is called Les Mourinoux. Its high towers could still be seen on the edge of Asnières-sur-Seine and Gennevilliers at the beginning of the 2010s. The marvelous golden city is no more; the concrete has exploded, reduced to a huge cloud of dust that the Trojan horse of redevelopment has blown. The war ended a long time ago; but did it really happen? With the beginning of Le Croissant de feu, you must soon leave everything and go. But if Ithaca is no more, where can Ulysses try to go?

Happy who, like Samir, has made a beautiful journey.  Or like that one, who has defeated the demon. And has then returned, full of tales and images, and has shared his pantheon with his parents. From Thailand,  North Africa or in imagination the friends converse about the country where to settle and with whom to remake the world But where to go and to find what? Glimmers of hope flicker here and there between the petals of the “Cité des fleurs”, in the waterfall graphed in the middle of a low wall, on the walls of the car park on which they write what has been, imagining what that might be. Le Croissant de feu is an odyssey. Rayane Mcirdi a bard, in whose books the heroes face in turn the djinns of Islam or of the past, the society undesirable adversaries and their own reflections. Keeping boredom and anger at bay, the artist’s heroes are in search of something they do not even dare express: if not the forever lost land, at least peace.

Spirits and ghosts, characters from popular culture or from previous generations, faceless adversaries and others whose names are summoned to pay them tribute, follow one another on the treacherous path. With AuBord de l’Oise or the refugees on Le Toit, the protagonists share their adventures, long after they took place. Here the fights are over, their conclusions known well before the characters and the audience arrive. Homer told the story after the war.  Rayane Mcirdi shows the film after the action: what is left after the clouds of smoke have dissipated, among physical and mental stones and ruins; what grows in spite of everything; what takes place on top of them, between them, despite everything.  The PlayStation brought on the top of the apartment building, sofas and chairs around the Switch in the car park, the flowers growing after the fire, the tales told in front of the embers no longer blown on. After Circe, Love Will Come Later; after the riot, Le Toit; after possession, Le Bord de l’Oise; after the collapse, Le Croissant de feu. After anger, sorrow or nostalgia: ataraxy, on which memories can at last be written.

When forces retreat and passions subside, stories remain. These are the stories that Rayane Mcirdi, a transmitter rather than a storyteller, has undertaken to collect. The name of the lost city must be sung, in order to understand the new world, which has come instead. If it is to be invented, its mythology is already being made up. In it are the seeds of the flowers which will soon open. 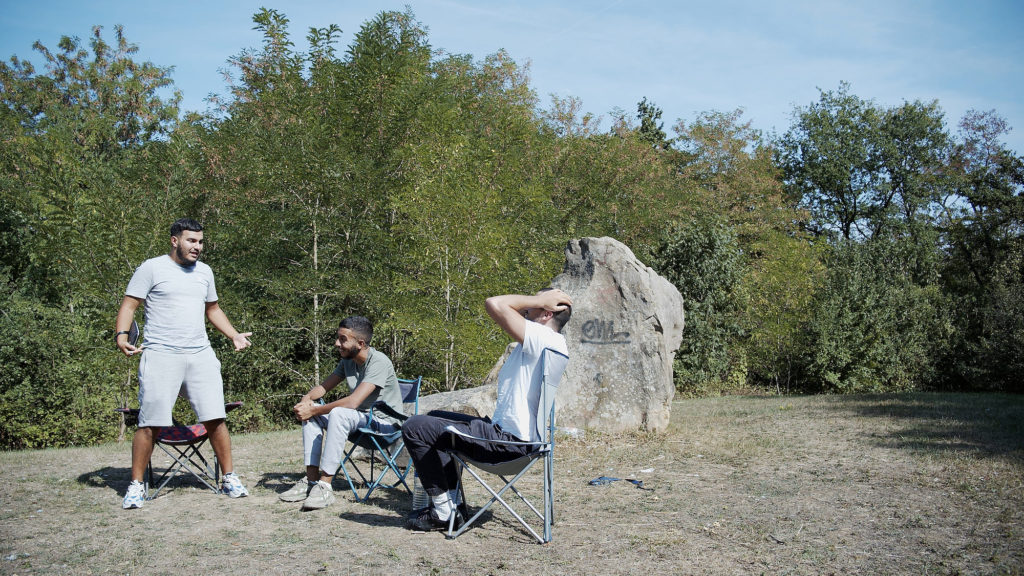 With our sincere thanks to Bétonsalon, art and research center, and the Laurent Godin and Polaris galleries for their loan of video material.