A circular form made with books is presented to the viewer on an armature at chest height, the spines of more than two-hundred volumes facing inward. The books are editions of a single title, Á Rebours by Joris-Karl Huysmans, first published in 1884. “The word decadent (from Latin, cadere, to fall, to decline), is an exact description of Huysmans’s hyperaesthetic, misanthropic, morbid antihero,” writes Bettina Knapp of the novel’s central character, Duke Jean des Esseintes.[1] She credits the Duke’s “inability to face reality, uncontrollable ennui, and hatred for a society he saw as superficial, banal, vulgar, and materialistic” as the impetus for his self-isolation in a villa on the outskirts of Paris at the end of the 19th century.[2]

In the 1880s, the Old World is dying and in response Des Esseintes retreats both into himself and into the surfaces of objects, wallowing in their artificiality as though it will save him from the consequences of the epistemic shift to which he is an unwilling witness. Each chapter of the novel delineates a phase of Des Esseintes’ attempt to reverse the order of things. He sleeps during the day and dresses extravagantly at night. He plants a garden with plants that look metallic, flowers that appear too vivid to be alive. He has a jeweled turtle made because of the way the precious stones set off the patterns in a rug in his parlor, on which the creature will later die from the weight of the stones. Turtles, after all, breathe through their shells. Afraid to leave the house, Des Esseintes reasons to himself that movement is futile, that “imagination could easily be substituted for the vulgar realities of things.”[3] Armed with appropriately Orientalist literature, one could travel effortlessly from one’s fireside without ever leaving its comfort.

Des Esseintes eventually finds himself at an impasse that will be recognizable to viewers in the final months of this disastrous year, 2020. The surfaces of things cannot be made to compensate for the complexity of collective human experience. It does not matter how meticulously you arrange the cut flowers on the entrance table if your mother cannot set foot in your house to appreciate the subtly of their fragrance. In Saadé’s installation, À Rebours, this impasse is rendered formally: because her library takes the shape of a ring, the most yellowed edition of Huysmans’ book is adjacent to its freshest edition. The interval between them reminds the viewer that life is cyclical and that there comes point when one cycle must end; continuity is not inexorable.

Based as Saadé is in Beirut, it is impossible not to read the visualization of entropy in À Rebours against a backdrop that Jim Muir, writing on July 13th 2020 for Orient XXI, describes as “a ship in a wild storm being driven towards the rocks with its engine broken down and the wheel unattended, while seven or eight captains and their crews fight on the deck over who should profit from the cargo, deaf to the cries of distress from desperate and terrified passengers.”[4]Since protests there began on October 17 2019, Lebanon had seen a year of incredible socio-political upheaval, even without the outbreak of COVID-19. In the middle of the worst economic crisis in its modern history, the shortages of even of the most basic food and commodities (fuel, etc.), rolling blackouts, and an 85% devaluation of its currency on the black market are all symptoms of systemic collapse.[5] 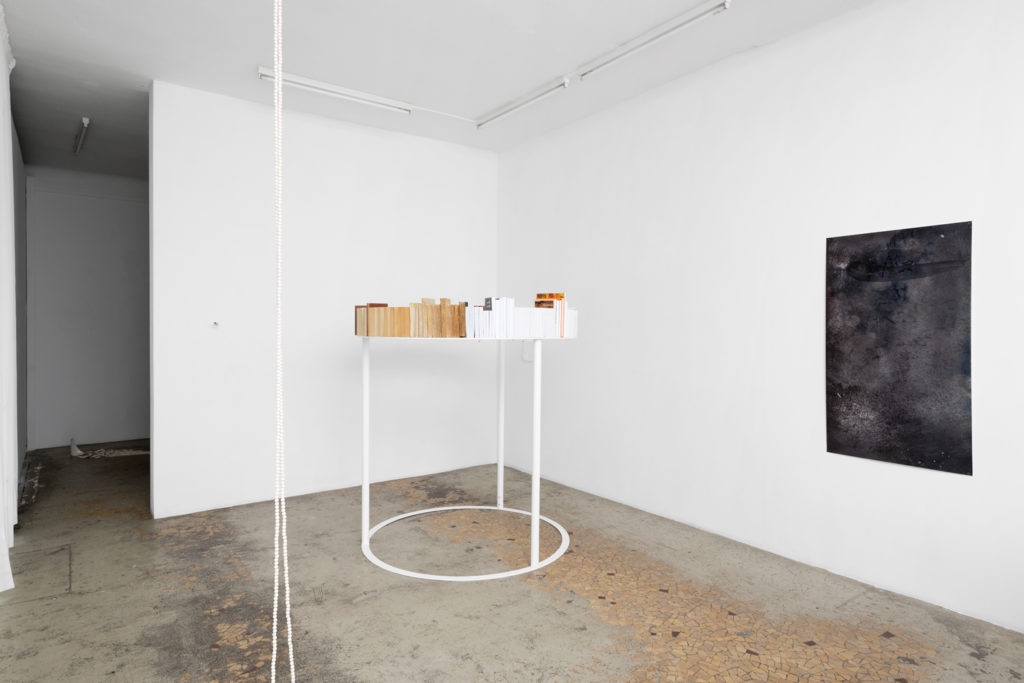 Talks with the IMF for a crucial fiscal lifeline have, at the time this text went to print, broken down. “The core of the issue is whether there can be unity of purpose in the country,” says the IMF managing director Kristalina Georgieva, broadly referring to whether sitting politicians would accept necessary measures to protect the bailout funding from corruption.[6]

Amidst this turmoil, Saadé’s installation, The Encounter of the First and Last Particles of Dust (2020) is centered on the possibility of movement into and out of the home, even under disaster conditions. White diaphanous curtains fall to the floor discretely yellowed with age, marked with stains and the traces of accidents. Though thick enough to distort the view either into or out of the room the fabric is porous to light, a shield but not a retreat from turmoil. These particular curtains hung in Saadé and her brother’s childhood bedroom in Lebanon for twelve years, between 1983 and 1995, and now they hang in Paris in the gallery’s window vitrines. Here too, a continent away, they act like a filter between the street and the exhibition, shielding Saadé’s delicate objects of amnesias, or memory work, from passersby but not completely obstructing their view.

Onto this support, the artist has embroidered twelve trajectories—the number of years she inhabited the room in which they hung. The lines of embroidery sketch trips taken during that interval between her home and those of friends and family members, among many other places that were emblematic at the time. It was not possible to go where one might wish as the country was fractured with no-go zones. These stitched patterns in thick seams of white string represents both the places that were accessible during the Lebanese Civil War and the paths to reach them that were available given the circumstances. White on white, the lines and their visibility from various points of view inside and outside the space of their exhibition attest to the way a child finds meaning and fosters curiosity where others would see only catastrophe and violence. 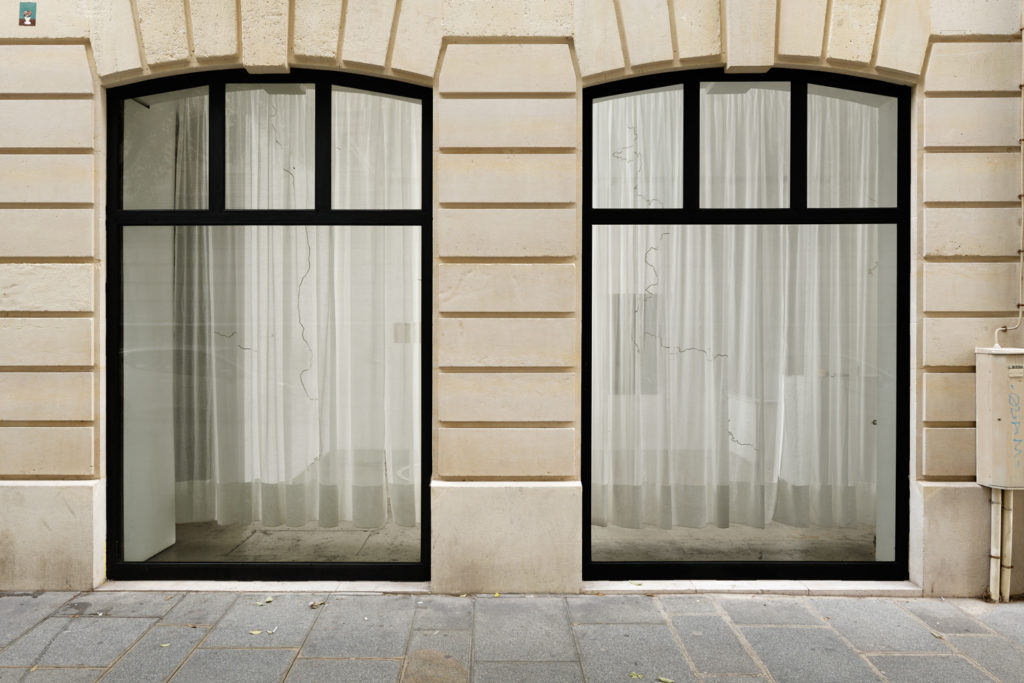 The other works in the exhibition respond to the present moment with the same impulse to look inward, as we are all forced to do in the current overlapping crises, toward the space of recollection that forms materialize. The installation Memory (2020) is a magic lantern construction that projects archetypal shapes from the children’s game Junior Memory, produced by a German educational game company that was founded in 1883, the year before À Rebours was first published and exactly a century before the artist’s birth. Not all the pairs of the original game are represented, some were lost in the intervening years. Saadé cuts the contours of a rose, a banana, a butterfly, a cockroach, a seahorse, and other foundational semiotic images into a cube illuminated from the inside. The proportions of the box are modeled on those of the room in which the aforementioned curtains once hung. 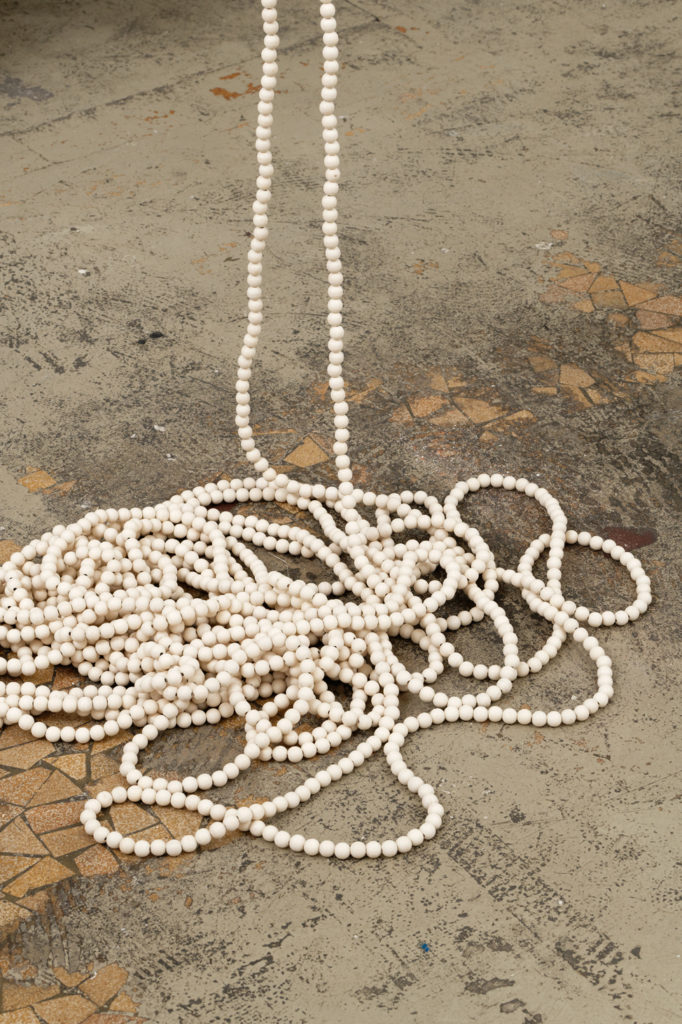 Luminous silhouettes play along the darkened walls of the installation space, the ghosts of shapes and objects once memorized inside a room, remembered with the same vividness and inevitable distortion as are the trajectories rendered in The Encounter of the First and Last Particles of Dust. One project filters the perspective from outside in, the other projects a perspective from inside outward.

Memory does not re-create the game’s vivid colors and perfect symmetry, both of which were meant to train a young mind’s capacity for recall and their sensitivity to a particular archetypal aesthetic register. For Saadé, memory is not repetition, it is a projection of the mind. The work’s intention is not to have the viewer experience her childhood by way of abstraction. Instead, the circular dance of silhouettes, like the circular progression of volumes in À Rebours, invite the viewer to join. The play of forms (shapes, narratives, trajectories) creates an open space, one that is abstract yet grounded through its indexical references to the artist’s experience. A novel for the end of an age, maps for country at war, bright shapes leaping through the dark (has the electricity been cut again?)—all propose memory as isolated refuge, but also as a warning.